I fight hard for people who have earned hundreds of thousands of dollars for their work and then are fired before payment is due and are never paid what they are owed. Many of the highest paid jobs are set up so that most of the earnings are not paid for many months or years after the work has been completed.

Employees at start-up companies and top officers of established companies are often promised stock or stock options or bonuses to be given many months or years later. All too often, companies fire these employees before this deferred compensation is due to try to get out of paying what they owe. 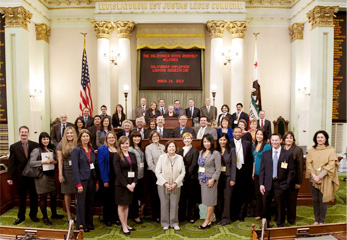 Phil Horowitz in the California State Assembly in 2013 (at far left), working to enact laws to protect California’s working people

What you need to know about commissions under California law

Employees who earn commissions for large sales that take many months to close are often owed a lot of money for the sales they made. All too often, companies fire these successful sales employees before the commissions are due and then refuse to pay what they owe. If you believe you’ve been cheated out of commissions you’ve earned, here are a few points to keep in mind:

I thoroughly review the terms of your commission or deferred compensation agreement and investigate the situation that led to your nonpayment, then take decisive steps to pursue the payment you deserve.

Other common types of nonpayment

There’s a lot said in the media nowadays about wage theft. Most wage theft is from lower-paid or average-paid employees. I represent these employees too. But employers who do not pay higher-paid employees what they are owed, such as their stock options, are also taking what does not belong to them.

When your employer refuses to pay you the money you earned, you need someone on your side. Call 415-391-0111 or e-mail me today.

PRACTICAL TIPS FOR EMPLOYEES IN CALIFORNIA

To get directions to this location, click "Directions" or "View larger map" on the map below (Google Maps will open in a new window).